Welcome to the Eat Sheep Wiki
This wiki is about the fun iPad game called "Eat Sheep". It was made using Blender and Unity, two free programs and is owned by CG COOKIE.

Sheep were bred at record rates in the early 60′s after a direct relationship was realized between getting a good night sleep and the amount of sheep in the world.
With the ability to count sheep into the thousands people were getting more sleep then they could ever dream of. So many sheep were bred and bred strong. Many sheep had to survive in the desert, winter tundra, and even on the moon (with space helmets of course). Basically anywhere there was room, sheep were bred.
Unfortunately this has gotten out of control and there is now an over abundance of sheep around the world, endangering productivity and has provided a surplus of warm wool sweaters.
To help fight this epidemic of Sheep, Monsters have been released into the wild to reduce the sheep population in a last ditch effort by local secret organizations. Of course monsters need to eat sheep to stay awake themselves.
Though some evil sheep wranglers from around the world, which have benefited from the over population, are determined to stop the monsters from eating the sheep.
Being the monster and productivity lover that you are… it is your job to feed your monster sheep to keep it awake to save the world! Fail to feed your monster the sheep and your cuddly monster friend will fall asleep, stay asleep too long and a wrangler will drag him away; continuing the sale of their wool as sweaters.
The road will be tough as sheep like to eat their food in obtrusive spaces, and each level the wrangler works to make more complicated sheep ranges to stop the monster from eating them all up. In turn destroying the wool empire the wrangle has set up for himself. 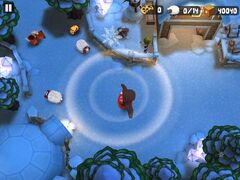 Retrieved from "https://eatsheep.fandom.com/wiki/Eat_Sheep_Wiki?oldid=4383"
Community content is available under CC-BY-SA unless otherwise noted.